Friends from the media, we thank you for your presence this morning to play your role as a fair arbiter in our political space.

The ongoing voter registration exercise that commenced on the 30th of June 2020 has bought untold consequences and we need to set the records straight. 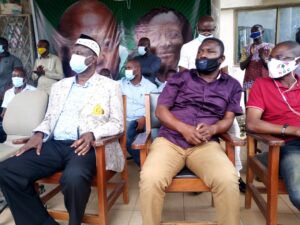 As you are aware, the NDC as a Political Party nationwide with Ashanti Regional branch being no exception has been actively participating in the registration exercise.

The EC had completed its 1st batch of phase 1 as per their gazetted schedule and the 2nd batch of phase 1 contrary to their gazetted schedule as by law enjoined. The EC has however decided to stick to its 3rd phase schedule as gazetted. We would therefore update you this morning on our observations so far on matters of security, widespread intimidation of registrants and agents of the NDC, disparities in figures from the EC and our collated figures and other relevant matters. 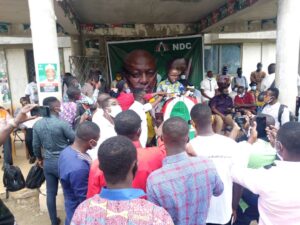 First of all, it is instructive to note that, the Sekyere Afram Plains Constituency has been a seat for the NDC since its creation in 2012 and has traditionally not been a hotspot in any electoral activity. Surprisingly, the District Security Council, chaired by the DCE who is also the Parliamentary Candidate for the NPP has decided to tag the Constituency as a hotspot for violence. On Tuesday 30th of June 2020, the Police arrested two (2) agents of the NDC over their decision to challenge persons they suspected to be ineligible to register at the Presby Primary School Centre, Drobonso. Upon their arrest, they were battered by the Police, contrary to Article 15 (2) of the 1992 Constitution and detained for 3 days. It is sad to state that both of them sustained various degrees of injuries, but they were denied medical support while in unlawful Police custody. It took the intervention of the regional leadership of the NDC to secure bail for them on the third day of their arrest contrary to Section 15 (1) of the Criminal Procedure Code, 1960 (Act 30).

In the same Sekyere Afram Plains Constituency, conflicting with the lawful procedure of challenging an applicant who is suspected to be ineligible by picking and completing a challenge form, on Thursday the 9th of July 2020, 15 registrants were arrested by the Military at the Sekyere Afram Plains District office of the EC on the instructions of the DCE that they were suspected foreigners, sadly, they were beaten severely by the Military and later locked up at the Drobonso Police Station. We request that the military officers that assaulted these young men be taken through the necessary disciplinary procedure and punished accordingly.

Ladies and gentlemen of the media, on the 6th of July 2020, the incumbent Member of Parliament for the Ejura Sekyedumase Constituency, Hon. Muhammed Bawa Braimah was physically attacked without provocation by thugs on the instructions of the MCE for the Ejura Sekyedumase Municipal Assembly at Ejura – Nkwanta. Some of these known thugs were earlier seen in the official vehicle of the MCE hours to the unfortunate physical attack on the MP. It is sad to state that, but for the timely intervention of the residents of Ejura Nkwanta, the narrative would have been awful. The onslaught on the MP was obviously intended to be lethal without human face. We use this platform to thank the good people of Ejura – Nkwanta for their bravery, timely intervention and show of love. 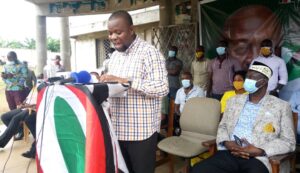 We regret to announce to you that though the perpetrators of this heinous crime are known very well and their names have been duly submitted to the Ejura Police Commander, Sup’t Owusu Bempah, none of them have been arrested as of today, the 14th of July 2020. In a rather bizarre manner, Sup’t Owusu Bempah has elected to refer to these known thugs at every opportunity as unknown assailants. We have subsequently reported the case to the Divisional Police Commander and the Regional Police Commander awaiting action. Ladies and gentlemen of the media, this development has outraged the whole Ejura Sekyedumase Constituency, and for fear of reprisal attacks, the MCE and the entire NPP leadership now monitors the ongoing voter registration exercise with police and military escorts. We wish to inform the Police and the Military that they are rather in breach of every known law and edict in Ghana since they are rather protecting known and suspected assailants and wrongdoers. 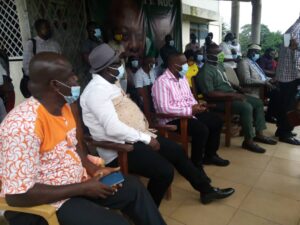 In Ejura Sekyedumase Constituency, we know where Bala, Afoko, Obour, Baba Wale, Hasanu, Abass, Puutin, Anyars, Alhassan Fuseini, Razaku and others together with their families live, we have only chosen to be law abiding citizens. We are by this medium giving the Ejura District Police Command 72 hours to arrest those we have named.

Furthermore, on the 2nd day of July 2020, gun wielding officers from the Anti Robbery Unit of the Ashanti Regional Police Command on the invitation of the NPP Constituency Chairman for the Manso Nkwanta Constituency stormed the Presby Primary B registration centre at Pakyi No. 2 and fired shots without cause. They chased and arrested 1 agent and 5 branch executives of the NDC for allegedly stalling the registration process, a claim that is utterly false. The NPP Constituency Chairman and Youth Organizer for the Manso Nkwata Constituency led the Police officers with a Nissan Hard body pickup vehicle through the principal streets of Pakyi No. 2 ostensibly to demonstrate power over the NDC. They accompanied the Police team to the regional police command and ordered for the branch officers and agent of the NDC to be locked up. It again took the Regional leadership of the NDC hours to get them bailed.

In addition, In the Ahafo Ano North Constituency on Saturday July 11 2020, the BVR kits deployed to the D/A Primary School Akwadaanyame 1 Registration Centre stopped functioning few hours after the start of the exercise and many attempts by the EC officials to resolve the issue were unsuccessful, the NDC agent for the centre traveled to the next community because there was no mobile connectivity at Akwadaanyame and contacted the District EC officer for replacement of the BVR. Unfortunately, the District EC Officer declined his request and claimed they simply needed an IT technician to rectify the situation, it took 4 hours for the IT technician to arrive, and regrettably, he was unable to resolve the situation. The centre that had over 300 registrants in the queue were aggressively dispersed by the military in a manner that is intimidating and shameful. Interestingly, this very community is a known stronghold of the NDC. The military is still heavily present in the Ahafo Ano North Constituency, we call on the 3rd infantry Battalion to withdraw its men and allow the registration exercise to be conducted without intimidation and needless aggression.

Ladies and gentlemen of the media, on the first day of the 3rd phase of the ongoing registration exercise, the EC was generally reported to be disorganized. There was news of non-deployment of BVR kits to some centres on time and delayed access to activation codes among others. It is shameful to state that, even in the ECs disorganized state, it still found space to be bias against the NDC.

Suffice to note that we made the following startling observations on the assumption of the third phase of the registration exercise;
In the Offinso North Constituency, the following registration centres had BVRs deployed and functioning properly as at 7:30am, Pentecost Church Gato Afrancho, Saviour International School Akumadan, Gyidi Church Akumadan No. 1, Methodist JHS Akumadan, RC Primary School Afrancho No. 2, Goerge best School Akumadan among others. Amazingly, these are traditional strongholds of the NPP. However, Registration centres in the following traditional strongholds of the NDC did not either have BVR kits deployed on time or could not have access to activation codes as at midday: Nkwaduoano DA Primary Mankramso, Tanokweam DA JHS, Nyamebekyere No. 2 Church, Medokwai D/A Primary School, CMB Shed Amoanim, Ijitihajia Islamic School Daaso.

Similarly, in the Asawase Constituency, Sepe Timpon with 13 registration centres had equipment successfully deployed and working without hitch as early as 7 :30am, however, registration centres at Bola – Bola, Aboabo, Madugu Palace among others that are known strongholds of the NDC had no BVR kits or as usual delayed access to activation codes for hours into the registration.

Similar situations were reported in the Manhyia North Constituency where Moshie Zongo registration centres had BVRs delayed or deployed without access to activation codes until after midday.

We have however seen a press release from the EC assuring the public that, they would make up for the lost time, but we do not trust the EC would choose deserving registration centres with fairness. We have therefore taken the pain to compile a full list of all registration centres where these selective delays occurred and would submit same for the consideration of the EC during their mop up exercise.

Another worrying trend is the decision of some of the EC district officers to vary the ECs gazetted movement plan as at when they feel like doing so. The Ejisu District Officer of the EC decided to register residents of Timeabu during batch 2 of phase 1 even though they were scheduled per the gazette to be registered in phase 4 of the exercise. This strange practice was attempted by the the Atwima Kwanwoma District Officer too, but same was fiercely resisted by the leadership of the Party. It is disturbing that these changes in the movement plan as gazetted only occurs in communities that are known strongholds of the NDC.

Ladies and gentlemen of the press, it has already been reported that the national youth organizer and the Ashanti Regional Youth Organizer of the NPP were busily engaging SHS students on their campuses across the region campaigning for President Akuffo Addo on Friday the 10th and Saturday the 11th of July 2020, while parents and guardians are forbidden by the President from accessing their own children in the name of adherence to COVID-19 safety protocols. We ask President Akuffo Addo respectfully; are his Party officials exclusively immune to COVID-19?

This development confirms our suspicion that the only reason for which the President had asked SHS 3 and 2 students to return to school in the face of a deadly pandemic is to satisfy his political aspirations and callous electoral maneuvers.

We are not whiners and we do not enjoy rehashing the same ills all the time with the hope of corrections being effected. We, however, lead people whose ways of expressing their frustration are varied. We therefore call on the Police to do the needful where applicable and the EC to be fair as mandated to prevent our followers from being human when injustice and evil triumphs longer than usual.

Notwithstanding all these challenges, we call on all our members and the many suffering Ghanaians to turn up in their numbers and register peacefully in the 3rd, 4th, 5th and 2nd phases of the voter registration exercise.

Victory is surely ours on December 7th 2020.

Tension is brewing within the ruling New Patriotic Party (NPP) in Eastern Region as some of the party’s parliamentary aspirants who lost the parliamentary primaries are warming up to contest as independent candidates. The constituencies in which the NPP members are seeking to go independent are: Akwatia, Fanteakwa South, Kade, Fanteakwa North, and surprising […]

I’ve been sick after the elections, please pray for me – Prophet Owusu Bempah

One of Ghana’s famous Prophet Owusu Bempah has announced that he has been indisposed after the declaration of the results of the 2020 general election by the electoral commission. He said during an interview with Nana Captain Smart this morning that he have been sick after the Elections and request for prayers from all loved […]

Broadcast journalist, Mugabe Maase has slammed the Ashanti regional chairman for the NPP Bernard Antwi Boasiako aka “Chairman Wontumi” over his comments that Sammy Gyamfi is a nobody and will wash his car with his law certificate. Mr Wontumi has berated the National Communications Officer for the opposition NDC for probing a TV host for […]