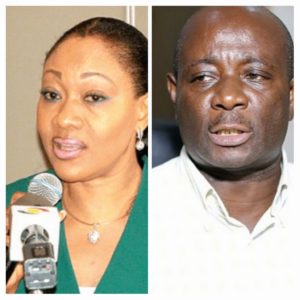 Leakynews.net is picking signals that the leader for the opposition party is determined to bar the Electoral Commission; a display of his displeasure over why the commission failed to hold the elections on the referendum last year 17 December 2019.

Leakynews.net has intercepted a yet to be released official statement from the office of Mr Akwasi Addai Odike and per the content, the peeved leader is questioning authorities on why they have until today failed to explain to Ghanaians reasons that prompted the cancelation of the referendum.

Last year a constitutional referendum was scheduled to be held on 17th December 2019 alongside the district level elections.

The foregoing would have allowed for the District election of Metropolitan, Municipal and District Chief Executives and also allow political parties to be involved in local elections.

Though the nation was on course to hold the referendum, the move was however aborted.

According to the statement bearing the signature of Mr. Akwasi Addai ‘Odike’- the businessman-turned-politician, Odike is bamboozled over the sudden u-turn after parliament gave an approval and allocated a budget for the exercise.

“Approval was given, money was released for the exercise and ballot papers were printed on the referendum. Why did the EC make an abrupt abrogation of the decision without even explaining to Ghanaians the reasons for her actions?” he said..

Per deductions, Mr. ‘Odike’ suspects that decisions of the Electoral Commission of Ghana under the leadership of Madam Jean Mensah is pupetted by the ruling party and that the latter realized that the outcome of the referendum wouldn’t have favoured their political agenda.

“…The EC is no more autonomous. Currently they are inconsistent and are behaving just like a puppet on a string controlled by a grand puppeteer”, he fingered after he confirmed his decision in an interview with www.leakynews.net.

“The EC is inconsistent. Initially they told us the Ghana card won’t be used as a requirement for voting in this year’s general elections until 2024 but now they have changed that decision”.

My Brothers and Sisters in Christ, thank you for joining us from your various locations this morning. Today marks the end of three days of fasting and prayer declared by our National Chairman last week. These are not normal times, not only for us Ghanaians, but people all around the world. I do, however, believe […]

‘Don’t use force to stop people from thinking’ – Prof. Opoku-Agyemang to gov’t

Running mate to the flagbearer of the National Democratic Congress (NDC) in the election 2020 campaign, has advised all political actors to express tolerance in their submissions in the run-up to the general elections. Prof Naana Jane Opoku-Agyemang underlined that  the values of respect imbibed by the Christian teachings must come to bare as they […]