Close to 80 taxi drivers operating at Asuofua have given the District Chief Executive Officer of Atwima Nwabiagya North District Hon Rebecca Yeboah a one-week ultimatum to fix all bad roads in areas including Achiase, Amoaman, Asaman and Asuofua or face their wrath. 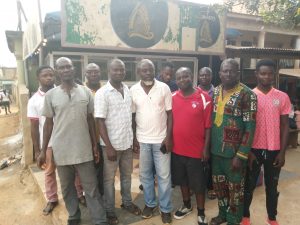 They have vowed to hit the streets, mount barricades and protest against the DCE should she flop in addressing their request within the above stipulated grace period.

Aggrieved drivers chanted “no good roads, no votes!” as they spoke to this medium, saying that the poor nature of roads in the above-mentioned communities poses a great danger to their vehicles and for that matter their profession.

“We brought this matter up before the DCE in a meeting a year ago. She told us that she was going to address it but as we speak to you now, nothing has been done by this arm-chair local government official…We pay revenue to the assembly but we are not seeing the relevance of the income they take from us ”; spokesperson for the group Asomailah Darko told this medium.

“She is a big disappointment and we even wonder why she was reappointed by the President to serve as the DCE for this area”, a highly peeved commercial driver added.

Attacking the Member of Parliament for the area Hon Benito Owusu Bio, they angrily expressed that the magnitude of his ineptness has contributed so much to the woes suffocating drivers and residents in the area.

“For all his many years in parliament, this Benito has not offered any meaningful contribution to the development of this district. No monumental project or initiative…He only shows up during campaign seasons to beg for votes”.Chairman for the group Kwame Asiedu noted.

Nana Amponsah Kwaa IV, Chief for Kwanwoma; a community located within the Atwima Kwanwoma District of Ashanti region has completed and commissioned the first phase of the construction of a jumbo market project for his people. The building of the first phase which is situated on an acre of land started within the month of […]

By Enock Akonnor, enockakonnor2013@gmail.com Authorities of the Amansie West District Assembly have presented Ghana Employment for Social Protection trainees’ setup tools and materials to 14 residents of the area. Beneficiaries were persons who successfully completed a 3-month soft skills training in dressmaking, auto mechanic and cosmetology. Among the items presented included an electronic industrial sowing […]

Implementers of the SOS-Green Project; an initiative funded under the European Union Emergency Trust Fund b for Africa (EUTF) have flared the Employability and entrepreneurship competence of women of Ejura Municipality through the celebration of the International Women’s Day. The global day is celebrated annually on March 8th to commemorate the cultural, political and socioeconomic […]