Civil Society Organizations (CSO’s) and Assembly members of Asokore Mampong Municipality were engaged in a meeting on Monday 28th September 2020 by officials of the European Union funded Project No Business as Usual (NBU). 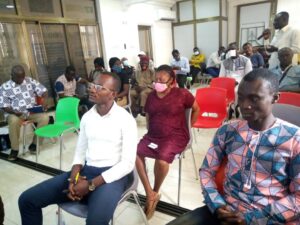 It was geared towards streamlining and fashioning out a clear road map to ensure skill acquired through the project are effectively utilized by them to ensure local socio-economic development. 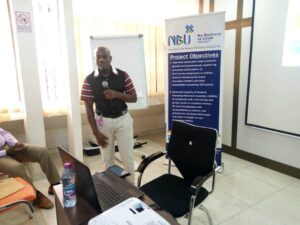 At the meeting CSO’s including Environmental Protection Association (EPA), Network for Empowered Youth (NEYOD), Empowered Centre for Women, Centre for Youth Literacy Development ,Centre for Community Livelihood Development among others made presentation on their mission, vision and activities in promoting local economic development. 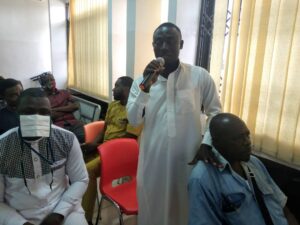 As way of addressing the litany of challenges, the assembly members at the end of the event were made to partner with CSOs to embark of steps required to salvage communities with the skills acquired through the NBU project.

Addressing the media, Vincent Ohene-Ntow (Program Manager- SBs/PPPs/Action Plan-NBU Project) made an indication that since the inception of the project, officials of NBU have offered many skills and capacity building workshops for relevant stakeholders aimed at promoting local socio-economic development within the Asokore Mampong Municipality.

According to him, officials realized that there was the need to ensure that all skills received are utilized by beneficiaries for the good of their respective communities.

Child Marriage: “Ghana Gov’t Is Not Up To The Task”- GNB Ghana Castigates

By Enock Akonnor, enockakonnor2013@gmail.com The National Chairperson for Girls Not Brides (GNB, Ghana); a coalition of Civil Society Organizations Hajia Fati Seidu has critiqued that government has not been up to the task in relation to the protection of the welfare and rights of the girl child. Heightened rate of child marriage in some parts […]

By Enock Akonnor, enockakonnor2013@gmail.com The ‘Beyond the Return’ secretariat of the Ghana Tourism Authority; a 10-year follow up project to “Year of Return, Ghana 2019” has organized a day’s customer service training for traditional caterers in Ashanti region. The capacity building event which forms part of the “December in GH 2022” initiative came into fruition […]

I Secretly Followed My Daughter To An Uncompleted Building, What I Saw Made Me Cry

A huge number of people would love to share their life stories with other People but they don’t have a good platform. In this article,I would like to share with you a life story which was shared on a whatsapp platform which sparked a lot of reactions. I am a 42-year old single mother whose […]