Cleric in the US has clearly disclosed the current innovation designed to ensure life gets back to something approaching normal, while maintaining a strict two-metre distance from one another. 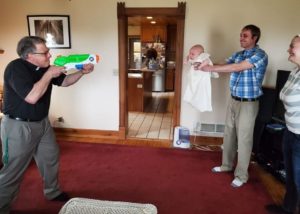 According to the content of a picture that has gone viral on social media, an unnamed clergyman is seen baptising a young child using a water pistol.

Though majority of people have suggested the picture is a spoof designed to lift spirits, it’s not the first time a Holy man has tried it.

In Canada another cleric has long ago adopted the same approach to christenings.

While the practise is immersive to say the least and may or may not be designed for a laugh rather than serious use, others have criticised the use of water pistols in the church as comical and, at worst, disrespectful. 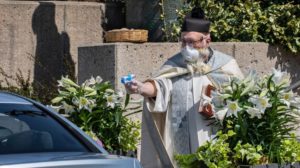 However, with priests in Ireland warning that an immediate return to normal practices like public Masses at this critical stage would potentially lead to a loss of life it’s clear an alternative solution is required, Super Soaker based or otherwise.

Given the need to maintain distance while ensuring the public has the right to practice their religious beliefs, priests across the Emerald Isle could soon be following the example of their American cousins.

Nana Amponsah Kwah IV, Chief for Kwanwoma, a community located within the Atwima Kwanwoma district has amplified his benevolent support for the vulnerable within his jurisdiction and beyond. Just last Wednesday 15th April 2020, the chief who is noted for his usual act of charity supplied 300 tubers of yam and 250 packs of eggs […]

Covid-19; Ghana President warned to release and compensate arrested Pastors…”else i will preach against NPP”.

A popular Ghanaian Evangelist is lacing his boot to influence Ghanaians to vote massively against the ruling party NPP. Evangelist Justice Wilberforce of Revival Fire Campus Ministry told www.leakynews.net that he “will vociferously and vehemently preach against NPP if Pastors who have been arrested and jailed for contravening and violating the so called covid-19 protocols […]

Law of Karma: See how Pontius Pilate died after sanctioning the death of JESUS CHRIST

It’s always interesting to know how a man who presided over the death of Jesus Christ of Nazareth who many Christians praise as the son of the living God. The Judean governor Pontius Pilate in the 1st century had authority to set Jesus free but according to the holy scriptures, he succumbed to pressure from […]