An NPP pro group called “Agenda 2020 and Beyond” has been formed within the Bantama constituency in Ashanti region. 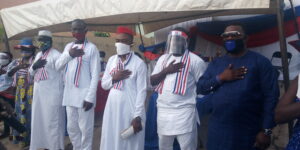 The mandate of members and executives is to embark on a nationwide door-to-door campaign for the party by touching the conscience of individuals on the success stories of implemented policies of NPP and win them into the fold of the party so as to facilitate NPP’s victory come December 2020 general elections.

Last Sunday, both regional and national executives of the group were inducted and sworn into office. The event was held within the Bantama Constituency.

As they deliver their mandate as in garnering votes for the party across Ghana, Chairperson for Identifiable Group –NPP Madam Anita Afriyie a.k.a mama China charged them to adopt some  of the orphan constituencies in the region and work massively within them.  She advised them not to allow the inactions of others to offend them and drive them out of group or the party but should instead remain focused and work hard for the victory of NPP.

Jean Mensa, Chairperson of Ghana’s Electoral Commission, on Wednesday said 37,762 challenge cases, representing 0. 20 per cent of the total number of registered voters, were recorded during the recently held Voter Registration Exercise. From the provisional data, she announced that, the Oti Region had the highest number of Challenge cases per population, representing 0.51 […]

Members of a newly formed pressure group called  “Vibrant Coalition for NPP” have kicked against Prof Mike Oquaye’s rejoinder issued in denial of his endorsement of Vice President Bawumia for the flagbearership come 2024. They have implored the rank and file of the NPP, challenging claims by Prof Oquaye that he never endorsed the vice […]