News publication which went viral that Mr. Akwasi Addai Odike, Founder, leader and National Chairman for United Progressive Party (UPP) plus two executives were arrested in Accra yesterday by the police has attracted a strong rebuttal from the trio. 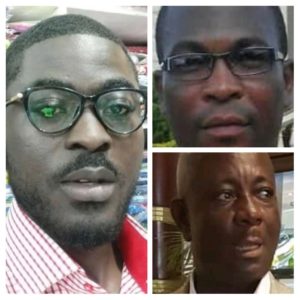 Yesterday as the just ended IPAC meeting was ongoing, news trickled in somewhere in the afternoon that the three; Crosby Charles-Armah (Ashanti Regional Chairman), Francis Addai (General Secretary) and Mr. Akwasi Addai Odike have been apprehended owing to a criminal charge levelled against them by two members of the party.

However, a carefully conducted inquisition by Leakynews.net into the matter reveals that nothing like arrest of the three materialized at the said meeting.

General Secretary for the party informed leakynews.net that none of them were arrested by the police and that at the time the false publication was aired, “we were gladly enjoying our launch”.

He explained that they were only invited by the police to respond to a charge on threat which was filed against them by two defected members of the party.

He described the two as some defected party members who are adamant and have harbored bitterness against them.

“They are just hungry people who have been influenced by somebody to frame up an allegation that we have threatened to kill them.”

“We were not arrested. We were invited to write our statement”, he cleared.

Responding to the allegation, the General Secretary underscored that the criminal charge against them doesn’t make sense in anyway and that their accusers were even unable to provide evidence to substantiate it.

For Francis Addai, the plot which was carried out yesterday by the defected members went far and has earned them much popularity since it offered them the opportunity to speak on a litany of radio platforms.

JANUARY 12, 2022 – WEDNESDAY At times I become obfuscated seeing the level and gravity at which captain smart spewing unfounded, untoward and unsubstantiated and concocted malfeasance in office on PRESIDENT Akuffo Addo, some government officials and particularly, Dr Bawumia. My obfuscation emanates from the fact that a whole government with all the law enforcement […]

The New Patriotic Party in Kwadaso Constituency in the Ashanti regional capital of Kumasi would be electing their Member of Parliament on Wednesday 24th April,2020 at all electoral areas within the Constituency. There are 3(three) Aspirants competing for the hot Kwadaso Constituency seat, Hon Dr S K Nuamah (Incumbent MP), Vincent Frimpong Manu and Dr […]

The National Concerned Small-Scale Miners Association of Ghana (NCSSMAG) has released 1,200 pickups to support the National Democratic Congress (NDC) and its flagbearer, John Dramani Mahama’s 2020 elections campaign. “We have committed one thousand two hundred (1,200) pickup vehicles at the full expense of the NCSSMAG to touch base with at least one million non-member […]