The Ghana National Council of Private Schools -GNACOPS has released a list of schools who applied for stimulus-package through Gnacops. 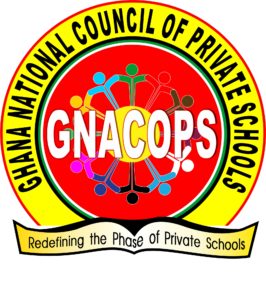 The Director of International Relations/Business Corporation of the Council Mr. Steve Revss confirmed that, as part of measures taken to present credible information of schools to the State and other international donor organisations which he is currently negotiating with, the council has engaged the services of state agencies to verify any and every bit of information various schools have sent to the private schools’ council.

“We have received over 6,000 applications from schools whose desire is to access part of the Government’s stimulus package/financial support and it is within our mandate to probe further to ascertain the authenticity of provided information presented to the Council so that Government will be in good position to approve every school that meets the requirements of a school in good standing. 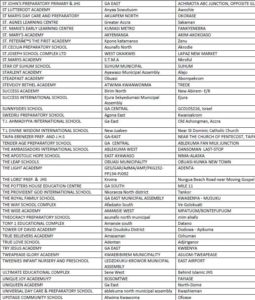 Mr. Steve Revss emphasized that, government is ready to support schools in this trying times but there is a need also, to position ourselves as recognised private educational institutions and reliable stakeholders in order to benefit from the national cake.

In addition he said that the released list covers those who have successfully submitted their information through the council’s portal and have been filtered through government Agencies such as the Ghana Revenue Authority (Tin Numbers authenticated) Register General’s Department (Company Registration Details), Location (with realtime GPS), Bank Details and have stated the total amount needed as loan or grant. 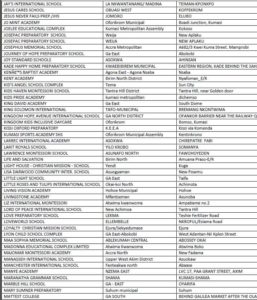 He assured the private schools and Government that since the NBSSI has opened their doors for companies to apply for part of the 600 million government stimulus package,
the council has also put in more pragmatic measures by meticulously verifying all submitted information at their disposal to ensure that the collective data that would be submitted finally to the Government through the NBSSI would be correct and without blemish.

Making reference to the council’s dealings with the council’s external parners, donors and International Agencies, he said they are also ready to come to the aid of private schools. Mr Revss disclosed that there are ongoing discussions with many of these organisations.
Negotiations are far advanced and the council is confident and quite hopeful that sufficient financial grants would be brought in to ease the burden of private schools.

The Director of international relations/Business cooperation of GNACOPS advised the entire private school stakeholders to frequently use the portal(www.gnacopsgh.com/register) created for them to reach out to the council and also inform all those who have not yet filled and submitted their information to d uo so immediately to avoid being late and subsequently disqualified.

As part of collective commitment to ensure that every child is supported to access quality education,  the leadership of Ghana National Council of Private Schools GNACOPS,  is putting measures in place proactive measures to support  private  educational systems  to adequately respond to the emerging  demands of  education. GNACOPS is set to develop  policies and programmes […]

The Ghana National Council Of Private Schools, GNACOPS in collaboration with the MoE through the National Council for Curriculum and Assessment has successfully implemented the training of private school teachers on the Common Core Program, CCP and the Standard-Based Curriculum, SBC, across the country. According to the council’s Executive Director, Mr Enoch Kwasi Gyetuah, more […]

Check Out The Meaning of R.S.V.P, Mr, Mrs, eg, AM, PM, etc And Other Acronyms

A lot of us are victims of using acronyms which we may not know their meanings. However, do not be troubled as this article will disclose to you the full meaning of some of these popular acronyms. Below are some of them and their meaning; 1. A.M & P.M: The fact still remains that almost […]