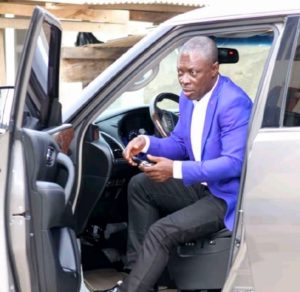 Rev Christian Kwabena Andrews as he is officially called has challenged the President on why he settled on using a state land for the construction of the mega temple.

Since it was his(President) personal decision to put up a cathedral for God, opting for a state property and funds generated by Christians for the actualization of his promise for God according to his (Kyiriabosom) assertion was a bad move.

He questioned the President on Fire TV last night on why he(President) did not dedicate part of his salary to purchase a tract of land and to construct the temple so long as the idea falls within the sphere of a personal decision.

“Do we have it in our constitution?”, he said rhetorically.

The leader for Life Assembly Worship Center before raising the foregoing heavily criticized the delivery of the President on his as he compared and contrasted it with the past governance of former President Jerry John Rawlings.

“…when Rawlings came he killed,he sold factories, he did things that were not pleasant but one thing I like about him is that he was able to extend electricity to the northern part of the country…he did well because electricity was difficult to come by those days…

For Nana Addo I haven’t seen anything…”.

Weeks ago, he gained a wide attention of the media after he told the President to lift imposed ban of churches in Ghana or face God’s wrath.

Covid-19 cure; Madagascar made a mistake for telling the world source of medicine

It was terrible mistake on the part of the leadership of Madagascar for disclosing to the world that it was artemisia plant they used to produce the herbal Coronavirus cure. At the moment, the relevance of the country has reduced owing to the reason that other African countries have commenced producing their own Coronavirus herbal […]

THOSE WITHOUT SPIRITUAL EYES CAN’T SEE THIS. STOP ATTACKING AND BLAMING THERESA ADDISON IF YOU DO NOT WANT TO SUFFER THE WRATH OF SIR JOHN “NSAMANKOM” is the spirit of the dead that manifest through the living to speak the dead’s heartfelt message. NSAMANKOM is purely spiritual and it is only interpretable by those with […]