Leakynews.net has received a hint on the uprising of a newly formed political party.

Bearing the name Risen People’s Party(RPP) with a sheep as its logo, graphic intellingence gathered by this medium indicates that the party was recently certified by the electoral commission of Ghana and that the leaders of the party are warming up to battle for the presidential seat in the upcoming 2020 general elections. 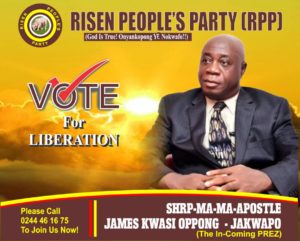 Leakynews.net has also scooped that RPP is the intellectual property of a prominent businessman in Kumasi called Mr James Kwasi Oppong a.k.a ‘JAKWAPO’.

His is currently the founder and leader of the party and is likely to contest as the flag bearer.

Aside the foregoing, ‘JAKWAPO’ also serves the capacity as a cleric, precisely founder and leader for Oppong Risen Church- a kumasi based charismatic denomination.

Interestingly, he has emerged as the second religious figure in Ghana to contest for the presidential seat.

President Akufo-Addo says his promise to construct more roads this year is not propaganda. “I told Ghanaians that this is the year of roads. Ghanaians can testify to this. We are not doing ‘green book’ propaganda roads, we are doing genuine roads on the ground for all to see. All my roads are ‘feeli feeli’ […]

Broadcast journalist “Captain Smart” has landed into big trouble owing to his sporadic attacks against some bigwigs of the New Patriotic Party (NPP) on matters related to corruption. His stands, advocacy and daily ranting on the airwaves in opposition to the inactions of some political figures as though a paragon of good virtue does not […]

Just In: John Kumah Salvaged By NPP Communicator After Political Banter With DCE