Tea is known as an aromatic beverage which is usually made by pouring hot water or boiling water over cured or fresh tea leaves. 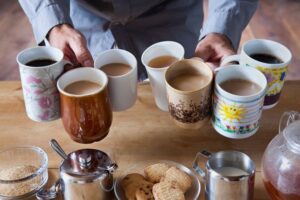 Though the quantity of milk and sugar is dependent on the preference of each consumer, but the method of preparation has always been the same. That is, pouring boiling water over the tea bag in a mug, then waiting for it to brew before adding milk and sugar.

A professional food and drink taster, Martin Isark, has however disclosed that it is the most common mistake we all make when it comes to making classic brew.

Specifically, the food and drink taster expert says that you should shy away from the use of boiling water in making a traditional brew for the reason that it kills the nuances of the tea leaving you with just a strong flavour of dry, astringent tannins.

Martin says that boiling water was originally used when it was important to make sure that the water was safe to drink and not to brew the tea. Therefore, he gave an advise that you should allow the boiling water to cool down to 80 degrees before using it to prepare your cup of tea.

This is what happens when you eat roasted maize

The best season to visit grandparents is the time that maize are fit to be roasted. They are very much appreciated when it is pouring, whereby you encompass the chimney and appreciate the experience of cooking and eating maize. Roasting maize is a booming business in significant towns. They are deliberately located at transport stations […]

How to prepare special habiscus drink(soobolo) with prekese and pineapple

In the wake of Coronavirus, the best way to stay safe is to be hydrated always by juicing up with natural fruits drinks and herbs. Natural fruits juices are so much filled with essential vitamins, fiber, folic acid, and minerals. Constant consumption of canned drinks has many negative health effects that can slowly take you […]

how to make BRUKINA drink at home

There are different varieties of local beverages enjoyed by Ghanaians. Some of the locally made beverages include, Pito, Asaana, Lamugin, Sobolo, Brukina among others. Today I want to teach you how to make your favourite local beverage called Brukina. Brukina is a beverage made among the people of the Northern sector in Ghana. Brukina is […]