The Ashanti regional Minister Hon Simon Osei has described the newly constructed Kejetia market as a facility which is “beautiful on the outside but within is full of filth.” 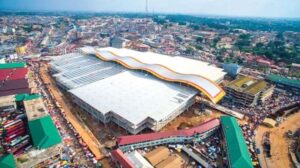 The experienced politician gave this description on Adom TV programme which waswas ai on Friday dubbed “one-on-one” when responding to a question put to him by the host vis-a-vis the Kejetia project which is hailed by the NDC as one of their monumental achievements in Ashanti region.

Though he admitted the facility is a type of state of the art, the outspoken government official sighted a number of shortfalls and inconveniences which the NDC-birthed project has imposed on the Metropolis especially the current vehicular congestion.

He recalled that before the NDC started putting up the project, commercial vehicles which were operating within the old Kejetia terminal numbered more than 1,000.

He said that after completion, only 108 commercial vehicles can now park within the terminal at a time.

“Over 900 vehicles have no space within the terminal and that is the reason why the whole city is congested including areas in front of the Komfo Anokye Teaching Hospital”.

“You see when you are learning something, learn and learn it well. Oversees where this type of facility is utilised, they create what we call a holding bay…to accommodate the rest of the vehicles.”

The renowned government official lashed the NDC for constructing shops for over 8,000 shop owners without providing a parking space for them.

“The structure is nice but things needed to offer enough benefit to users of the facility are not there”, he fingered.

Presiding member for Asokore Mampong Municipal Assembly Hon Matthew Amisah has endorsed the call for a peace walk between the incumbent Member of Parliament Hon Muntakar Mubarak of the NDC and the NPP’s aspiring candidate Hon Alidu Seidu. Though the move will be a way of promoting peace among supporters of the duo before, during […]

Two people have been shot at the Church of Christ polling station at Kasoa in the Awutu Senya East constituency of the Central Region in the ongoing general elections. The gunshots wrung from a black Toyota Land Cruiser. The targets of the shooters were driving in a Kia saloon car. The occupants of the two […]

President Akuffo Addo has disclosed another utility relife package which is the absorption of bills on electricity consumption for all Ghanaians so as to lessen the pressure on citizens as government fights the terrible COVID-19. He announced in his address to the nation tonight Thursday 9th April 2020 that “…as part of measures of mitigating […]