Chief for Akotosu, a community located within the Asokore Mampong Municipality has announced to pull down all buildings and properties constructed at unapproved locations in his community.

He told www.leakynews.net on Sunday that he will commence the demolishing very soon and that the exercise will be carried out jointly with officials of Asokore Mampong Municipal Assembly.

Nana Osei Gyebi II informed that illicit building of houses and other structures at areas zoned for link road and passage route of streams characterize the area, making living very difficult for residents.

“I will pull many buildings down because I have not given out any land to them to put up such structures. We will stop that menace else people will keep on blaming Chiefs as the cause of building at unauthorized areas”, he noted.

Especially at an area called “red park”, he pinpointed that some residents have taken the law into their hands and have built on streets, insofar blocking the road. 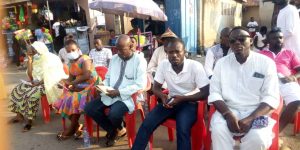 Speaking at a community engagement event organised under the auspices of No Business as Usual (NBU) Project, he lamented that per the state of affairs, it appears no law works at Akotosu and by extension Akurem electoral area. 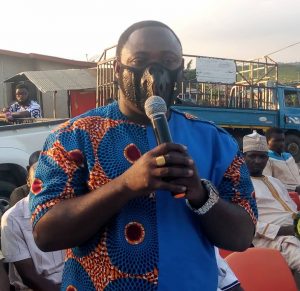 In his address at the event, he detailed that blockage of roads without permit to hold events, over speeding by motor riders, substance abuse among youth has plagued the area.

Assemblyman for Akurem Hon Ibrahim Issah reckoning on his service since assumption into office lamented the declined support from households against crime in the area. 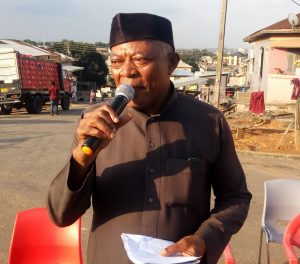 He explained that monthly contribution by households pegged at GHs 15.00 each to resource members of a voluntary security taskforce is not forthcoming.

Notwithstanding the above challenge, he highlighted a number of achievements chopped for the electoral area through his instrumentality.

They’re are the provision of street lights for places including “Ali and Dauda”, Akotoso, Memp3as3m, re-roofing and re-wiring of a state JHS block at Memp3as3m, commissioning of a library, construction of speed rumps at Memp3as3m among others.

Present at the event were; Municipal Director for the National Commission For Civic Education (NCCE) Mr. Matthew Agbenu, Presiding Member for the Assembly, opinion and religious leaders.

By Enock Akonnor, enockakonnor2013@gmail.com Authorities of the Amansie West District Assembly have presented Ghana Employment for Social Protection trainees’ setup tools and materials to 14 residents of the area. Beneficiaries were persons who successfully completed a 3-month soft skills training in dressmaking, auto mechanic and cosmetology. Among the items presented included an electronic industrial sowing […]

‘Get It Right’ Campaign Deals With Indiscipline On The Road

‘Get it Right’, an initiative of the National Road Safety Authority (NRSA) to ensure sanity on the road, has gotten underway in the Ashanti Region. The programme is in line with the agenda to promote acceptable behaviourial practices and discipline amongst road users in order to protect the lives of the people. Ms. Simbiat Wiredu, […]

Coordinator for the European Union Funded Project; No Business As Usual (NBU) has delivered a strong message to Ghanaians especially the youth vis-à-vis how they must go about the celebration of Valentine’s Day on 14 February 2021. Ahead of the day set aside for the celebration, Roberta Aryeteh said in her statement at the hub […]