Broadcast journalist for a Kumasi based radio station Metro Fm Mr. Baffour Awuah Justice has officially submitted his nomination form for his election onto the Council of State. 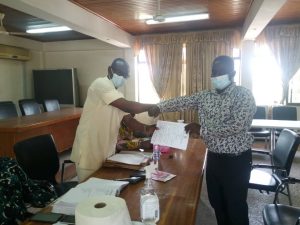 The submission was done on Thursday at the Ashanti Regional office of the Electoral Commission, an expression of his preparedness to contest in the upcoming elections which is scheduled to happen on 12th February 2021.

The young journalist lacing his boot to counsel the President in the performance of his functions if he emerges victorious.

The nomination forms were received by the Regional Director of EC Mr. Bannor Agyeman hours before 12:00 noon.

Mr. Baffour Awuah Justice doubles as the Assemblyman for Akyremade Kwanwoma Benynase electoral area. He is young and a vibrant youth who has been practicing journalism as a profession for over 10 years. He is happily married and a father of one boy.

He told www.leakynews.net that his decision to contest for the position was triggered by his desire to prove to the world that Ghanaian youth has what it takes to offer wise counsel and better recommendations to the President.

Not Again!!!!! Musah Superior Spits Fire On John Boadu Over “They Can’t Do The Work” Comment

Musah Superior Writes… From John Boadu to other GS hopefuls. “l am not moved by names because they can’t do the work as I can. I see it as a distraction because it means you would have to leave what you are doing to campaign; had it not been that you would’ve concentrated fully on […]

Be Smart: 8 Tips on How to Win a Political Election…NPP Lacks Number 2

Welcome home valued reader. In fact at the beginning of every race, you want to give yourself the best chance, and that means equipping yourself with the knowledge and the skills necessary to cross the finish line. It is like the Olympics, there is only one first place in many races, but getting there can […]

“Anytime We Hear Her Name, It Means Goodies Are Coming”- KMA Boss

Mayor for Kumasi Metropolis Hon Osei Assibey has heaped praises on the first lady of Ghana Madam Rebecca Akuffo-Addo following the litany of support she has and is offering his jurisdiction. The wife of the President of Ghana as explained by the Mayor has dispensed many developmental support to the Metropolis including the ultramodern mother […]