The Member of Parliament for Kwadaso, Dr S.K Nuamah has inspected ongoing developmental projects in his area.

He also visited sites where projects commenced by his outfit were nearing completion.

At Apatrapa, the MP accompanied by the elected assembly member inspected a 12 seater toilet with solar panel mechanized borehole built for the Roman Catholic School. 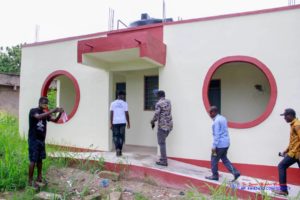 At Tanoso and Techiman, Dr Nuamah inspected mechanized boreholes built for the people in the two electoral areas.

The team also visited sites where the Public Utilities and Regulatory Commission (PURC) is constructing 4 boreholes.

Speaking to leakynews.net, Dr Nuamah said all these projects had been carefully targeted to bring development to the Kwadaso constituency.

He noted that the projects such as boreholes and toilet facilities had been constructed based on the request of the people and elected assembly members.

Dr Nuamah revealed that upon completion of these projects many others in selected places would come up.

He stressed that the people of Kwadaso needed such basic social amenities to make their lives a bit comfortable.

“These projects that have been undertaken are to make the lives of the people in Kwadaso much better since access to these are very crucial”, Dr S.K Nuamah noted.

Impressed by the work rate and number of projects at their electoral areas, Hon Gifty Amoah, Nyankyerenase assembly member speaking on behalf of the assembly members commended the MP for them.

She noted that these projects would contribute to the wellbeing of the people in Kwadaso.

The Nyankyerenase assembly member stressed that Kwadaso can now boast of such development projects because the NPP party chose a candidate who was resourceful to represent them in Parliament.

She asked that managers of the facilities keep them in good condition so that it lasts for the people.

Pressure Mounts On IGP Over Insecurity At Asunafo South District

Some aggrieved youth of Ahafo Anwiam whose lives are currently in danger are mounting pressure on IGP Dr. George Akuffo Dampare to expedite action to effect the immediate arrest of a person they have identified as Yaw Osei a.k.a “Junior”. They have alleged that the latter has for some time now been terrorizing them in […]

Just In: Lands Commission Drops Facts In Defense Of Demolition At Mpehuasem

20TH APRIL, 2022 PRESS RELEASE ALL MEDIA HOUSES RE: STATEMENT ON THE ABUSE AND USE OF STATE POWER IN THE DEMOLITION OF OUR PROPERTIES CAUSING THREAT OF DANGER AND PEACE IN OUR COMMUNITY – DELIVERED BY NII TORGBOR OBODAI AMPAO VI, MANTSE OF MPEHUASEM ON 16TH APRIL, 2022. The attention of the Lands Commission has […]

HIVE BLOCKCHAIN’s Hands Over Borehole To Residents Of Fawoade

Hive blockchain serves a community in Ashanti Region of Ghana with potable drinking water by constructing a borehole for Fawoade town in Kumasi. A few of the main demands to assure outstanding health and the full well-being of individuals in our society is the availability of drinkable drinking water. Ghana and many developing countries are […]