On Wednesday, 19th August, 2020, the Mayor of the Kumasi City, Hon. Osei Assibey Antwi received a delegation from one of the best universities in the country, Kwame Nkrumah University Of Science and Technology (KNUST). 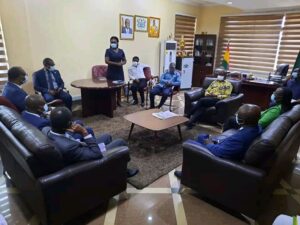 The newly inducted Vice Chancellor of KNUST, Professor Mrs. Rita Akosua Dickson, led a high powered delegation from her outfit to pay a courtesy call on the managers of the Kumasi City.

The Mayor on his part, requested for a continued collaboration between KMA and KNUST to produce the synergy required to turn around the fortunes of the two important institutions of state. He again congratulated the first female Vice Chancellor and assured her of the Assembly’s preparedness to make her succeed.

Government of Ghana has launched www.deliverytracker.gov.gh, a website that helps the general public to “interrogate the data” on infrastructural projects undertaken by the Akufo-Addo administration. Vice President, Alhaji Dr Mahamudu Bawumia launched the government website at a sponsored ‘Town Hall Meeting’ at the Ghana Academy of Arts and Sciences auditorium in Accra on Tuesday, August […]

MESTI working closely with others to achieve goals – Minister

The Ministry of Environment, Science Technology and Innovation (MESTI) is working in collaboration with other ministries towards programs and policies of the government, according to sector Minister, Professor Kwabena Frimpong-Boateng. He told journalists during a working visit in his office that, his outfit apart from protecting the environment from degradation is also working closely with […]