Kumasi Metropolitan Assembly and the Ministry of Tourism, Arts and Culture on Friday signed a Memorandum of Understanding (MOU) with a Chinese company; China Bengbu International Technology and Economic Cooperation Ltd for the construction of an ultramodern Convention Center within the Kumasi Metropolis. 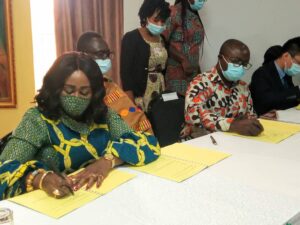 The state of the art facility is designed for a large conference, drama, music performance and modern dance. When completed, it will have a 2000 seating capacity at the main auditorium and a half 600 seats to meet specially tailored conferences and meetings.

The theater will combine with the entrance of the foyer to form an open exhibition area and will also boast a top-notch catering facility.

“This theater when completed will not only add to the architectural and cultural skyline of Kumasi. It will also bring new energies into the arts and culture space in and around Kumasi such as the commercial, economic and social energies to be drawn from the many events that it will host. There will be jobs created, increase in business and event tourism as well as the spillover effects on ancillary arts and culture space in Kumasi and the Ashanti Region and even beyond”, said the Minster for Tourism Hon Barbara Oteng Gyasi at the event.

After the signing of the MOU, the sector Minster informed the press that the project will kick-start after the Chinese investor put together all final documentations within a period of one year and present them to the Ministry. 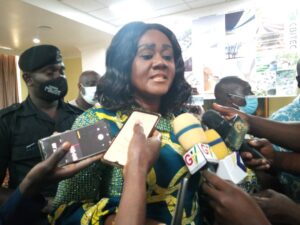 The Ministry will from there take a step with the Ministry of Finance, draw conclusion and start the project which according to her will take about 2 years to finish. 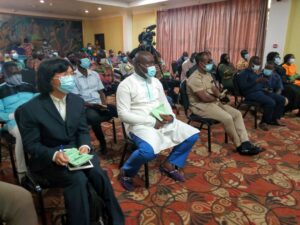 The citing of the project as disclosed by the Mayor for Kumasi Hon Osei Assibey Antwi is the large tract of land sandwiched between the wall of Golden Tulip Hotel and the office of the Electricity Company. 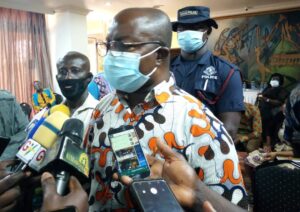 He told the media that the putting up of the convention Centre will boost the level of tourism, employment generation and the patronage of goods within the metropolis.

The rich history and culture of the Asante Kingdom will be given much prominence at the museum which will be built as an addition to the facility.

“This will attract a lot of people and tourists into the Metropolis and uplift the image of Asanteman”, he said.

The National Lottery Authority(NLA) would like to wish all Staff and stakeholders a happy Workers’ Day for their continuous contributions to the growth and sustainability of the Authority. The Authority really appreciates the efforts and sacrifices of our Staff, Lotto Marketing Companies and Partner Companies especially during this period of Coronavirus pandemic. The Board and […]

Former Minister of Finance Seth Emmanuel Terkper says the previous government was on course to solving the banking crisis without the collapse of banks and the loss of jobs. He said about GH¢250 million was paid to the banks with anticipated flow to refinance about 11 banks. Mr Terkper insisted that the Mahama-led administration started […]

The Board of KGL Technology Limited, in consultation with the leadership of both the National Lottery Authority(NLA) and Association of Lotto Marketing Companies(ALMC), will set up a Welfare Fund aimed at availing funds to be accessed solely by all officially licensed Lotto Marketing Companies under the National Lottery Authority(NLA). The fund seeks to promote the […]