On Friday 18th September 2020 at an Ashanti regional awards event organised by the authority at Rattray park, the Metropolitan Chief Executive for KMA was given a honourary award for his “outstanding contribution to tourism promotion” for the year 2019. 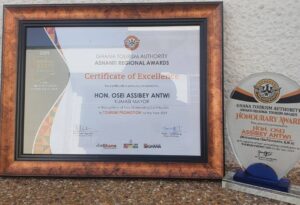 He also received a certificate of excellence which was jointly signed by the Regional Manager for Ghana Tourism Authority Mr. Peter Acheampong and the CEO Mr. Akwasi Agyemang.

The theme for the event was “GROWING TOURISM BEYOND THE RETURN”.

The foregoing honour gave credence to his numerous interventions and initiatives geared towards uplifting tourism within the Metropolis.

Speaking to www.leakynews.net after the event, he underlined tourism as an area which he has given proper focus and attention since it is a key driving force for wealth creation and employment for the people.

He reiterated his determination in ensuring that significant boost is offered to every aspect of the Metropolis that has to do with tourism.

Few weeks ago, he (Kumasi Mayor) and the Minister for Tourism, Arts and Culture Hon Barbara Oteng signed a Memorandum of Understanding (MOU) with a Chinese company; China Bengbu International Technology and Economic Cooperation Ltd for the construction of an ultramodern Convention Center within the Kumasi Metropolis.

The state of the art facility is designed for a large conference, drama, music performance and modern dance.

When completed, it will have a 2000 seating capacity at the main auditorium and a half 600 seats to meet specially tailored conferences and meetings.

Even prior to the COVID-19 pandemic, people were having financial hardships. Following the pandemic and the effect that it’s had on the economy, 70% of Americans are struggling to make ends meet. It’s particularly gloomy for older Americans and people of color. However, all hope is not lost. If you are unfortunately having difficulty financially, […]

Kosmos Innovation Center (KIC), a leading non-profit organisation in the agribusiness sector, has received two awards at the just ended Ghana Business Awards. The Ghana Business Awards event is organized every year to recognize and reward excellence across all sectors. It also recognises the contribution of various sector players towards developing enterprise and economic growth […]