30 Sierra Leone nationals who managed to find their way into Ghana have been defrauded by managers of a popular business network called Qnet. 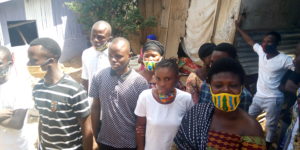 They arrived within the early weeks of February before all borders were announced closed order by His Excellency Nana Addo Danquah Akuffo Addo-
President of Ghana.

Operators of the marketing network according to their narration duped them $750 each on the pretext of securing them a well paid job in a Gold mining company in Ghana. 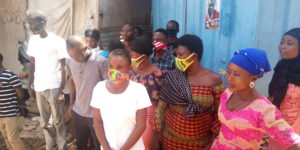 Way back in their country before their dilemma, they revealed that a young citizen of Sierra Leone called James Kamara introduced them to what looked like a juicy job opportunity engineered by a consultancy firm which latter turned out to be Qnet.

They were told it was a Gold mining company and was employing new staff with a package of $650 monthly salary.

Conditions for the recruitment as explained by the middle man was an upfront payment of $750 per head.

Sounding too sweet to their ears, they subscribed to the offer and embarked on a seven-day journey by road to Ghana, Abuakwa-Manhyia of Ashanti region to be precise and made the payment to one Mr. Joseph Asumah, who they exposed as the Manager for Qnet. 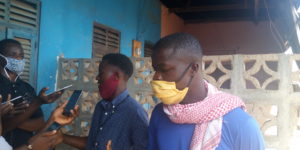 “We paid $750 each without any receipt and were not given access to even view the content of the application form”, they shared their story sadly.

After waiting for few days in a rented house provided by managers of the network company, they were told by the leaders of Qnet that they won’t be working with a mining company as initially indicated but as network marketing executives for Qnet.

Realizing they had fallen victim to a fraudulent business scheme, they vowed to report the matter to the police for their monies.

Sharing his side of the ordeal, leader for the group Mohammed Bonga said they were told point black by the Qnet officials that there is no way they will get their monies back since monies paid in Ghana are not refundable.

POLICE  BRUTALITIES
Amidst tears of sorrow, they recalled how the network operators invited uniformed police officials from Abuakwa Police station to beat them up at their place of residence which is located at Manhyia within the Atwima District.

“They lined us up in the sun and tortured us bitterly all because they were falsely told that we are foreign nationals who sneaked into the country despite the closure of border restriction.

“One CID at Abuakwa police station called Washington slapped my face when I told him we have been defrauded and therefore want our monies back”, a victim lamented.

Showing visible marks of injury on their skin, they highlighted how they were sometimes beaten by the Qnet managers anytime they confronted them for their monies.

“We have no money on us now. We even beg for food to eat”.

When media men who were present at the briefing called on Abuakwa Police commander at his office for his reaction, he told them to “manage with the little information you have received from them”.

At the briefing, they called on the government of Ghana to come to their aid by claiming their monies for them.

“We also also want the government to help us so that we will be able to return to our country”.

Bekwai Municipal Assembly has heightened its efforts at improving the standard of sanitation. Through a partnership with Kedat K7 Ghana Limited a non-governmental organization, it has rolled out a construction and installation of bio digester toilet facility program for all households within the municipality. Under the initiative, beneficiaries will pay half of the actual cost […]

By Enock Akonnor, enockakonnor2013@gmail.com The ‘Beyond the Return’ secretariat of the Ghana Tourism Authority; a 10-year follow up project to “Year of Return, Ghana 2019” has organized a day’s customer service training for traditional caterers in Ashanti region. The capacity building event which forms part of the “December in GH 2022” initiative came into fruition […]

Child Marriage: “Ghana Gov’t Is Not Up To The Task”- GNB Ghana Castigates

By Enock Akonnor, enockakonnor2013@gmail.com The National Chairperson for Girls Not Brides (GNB, Ghana); a coalition of Civil Society Organizations Hajia Fati Seidu has critiqued that government has not been up to the task in relation to the protection of the welfare and rights of the girl child. Heightened rate of child marriage in some parts […]