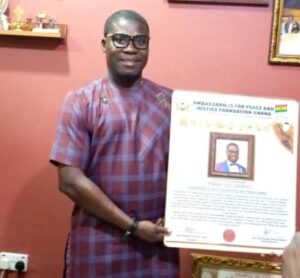 Frank Osei a.k.a DENERO admits the simmering debate ongoing especially among small scale miners leaves much to be desired especially where people are drawing conclusions from perceptions.

Reacting to rising concerns where NPP new manifesto launched just last week in Cape Coast is reported to have failed to cover the small scale mining sector moments after receiving an award in exceptional leadership from Ambassadors for Peace and Justice Foundation Ghana ( NGO), could not fathom why the party could create such a missing link.

Frank Osei has been recognized by the Kumasi based NGO which speaks and care for the vulnerable for his comittment and contributions to fight illegal dredgers operating on our river bodies.

Upon such recognition, the group described the leadership qualities of Frank Osei in these words trustworthy, visionary, knowledgeable and integrity and again conferred on him the title ” Ambassador” for Justice to assist the needy.

Mr Osei was thankful to the group and indicated the motivation to do more as a result of the recognition.
He spoke about GNASSM’s readiness to lead and continue the fight against river pollution through illegal mining.

Ghana’s Ambassador to China, His Excellency Edward Boateng, working together with the Hunan government of China, has set up a new marketing center in China. It was specifically built to sell and promote strictly African cocoa. Hunan Province was authorised by the Central Chinese government to spearhead the China-Africa Trade Initiative, and it became the […]

These Are The Most Expensive Materials In The World, Gold Is Not On The List

This piece offers a presentation on materials of extraordinary value, positioning them from the most minimal value down to the greatest cost. Tragically, shockingly and interestingly gold isn’t generally on the rundown. 1. Plutonium is $4,000 per gram. A heavy yet sensitive radioactive metal of a gleaming white shading. Its motivations vary from the making […]

Plans are far advanced for the conversion of the forest land within Asante Mampong scarp of Mampong Municipality in Ashanti Region into an ultramodern tourist destination in the world, www.leakynews.net has been hinted exclusively. A registered Ghana-based tourism organisation named Oheneba Tourist Center has been officially mandated by government and traditional authorities of Asante Mampong to commence a […]