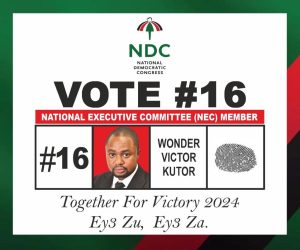 In his view , he would implement a number of laudable policies that would encourage participation and promote transparency and accountability within the NDC party.

In an interview , Mr Kutor indicated that he would offer the impeccable leadership that would re-organise and mend the cracks in the NDC into an attractive and formidable party that will provide opportunities to the members of the party .

He further stated that the party has a daunting task facing the NDC as a party to show the New Patriotic Party (NPP) the exit and rescue the country to economic recovery, saying that the NDC should be properly organised with leadership that is disciplined, transparent, accountable, fearless, courageous and hardworking to become a member of the NEC who is not compromised.

He stressed that as NEC member he will ensure that the NDC implements strategies that will dwindle the pressure in the party and make sure to push reforms to give branches, constituencies,regions and national to be able to undertake projects and programmes that builds the grassroots level,” Mr Mr Kutor pointed out.

He noted that the party would work to revive the lost hope in the NDC that was established to provide relief to members and their dependents who were impacted negatively in the course of their work for the party.

He appealed to all delegates to throw their unflinching supports to him to be elected as NEC member and the victory of NDC will be materialised.

• To Support Key Stakeholders of the Party so that the NDC can Win elections on all Campuses.

•As an International Immigration Consultant, He will help aid the party in educating members on how the next Ndc government can facilitate scholarships to help them study abroad.

• I shall bring my legal knowledge on board to Support the training of polling agents as go into the 2024 general elections.

By Enock Akonnor, enockakonnor2013@gmail.com Ghanaian politician Percival Kofi Akpaloo has kicked against the call by members of parliament for the dismissal of the Finance Minister Ken Ofori Atta over charges of corruption and economic mismanagement. The sacking of the Minister of State for Finance Charles Adu Boahen by the President over allegations of impropriety according […]

“They Are These People, Consider Them First”- KMA Boss Boldly Tells Military

Kumasi City Mayor Hon Osei Assibey Antwi has coughed out a laudable recommendation to authorities in charge of Ghana Military. He has suggested that when it comes to recruitment of persons into the military, authorities responsible should foremost give consideration to students who during their tenure in school were part of the Cadet Core before […]