Prof. Kwamena Ahwoi has disclosed that the former Chairman of the Electoral Commission, Dr Kwadwo Afari-Gyan, was discovered at a drinking spot.

According to the former Local Government Minister, he was sent on a mission to meet one Kofi Drah, a Senior Lecturer at the Department of Political Science at the University of Ghana by Captain Kojo Tsikata to convince him [Kofi Drah] to join the committee of experts to work on Ghana’s 1992 constitution.

Prof. Ahwoi narrated that, as he was on his way, he branched into a drinking spot around the Achimota Forest where a number of University of Ghana lecturers including Dr Kwesi Botchwey usually met for the occasional social drinks.

He said, when he got to the drinking spot, Dr Afari-Gyan was seated alone drinking.

“I joined him and engaged him in a conversation, hoping to find out from him the residence of Mr Drah. As the conversation dragged on, I began to see Dr Afari-Gyan in a new light. 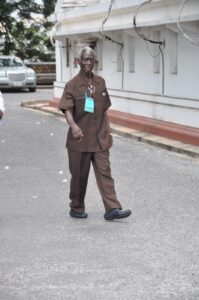 He was not only a progressive intellectual; he was also pro-Nkrumaist and not hostile to the revolution,” he said in his new controversial book ‘Working with Rawlings’.

He continued: “I steered the conversation in the direction of the unfolding transition to constitutional rule and his views seemed to echo those of the Provisional National Defence Council (PNDC).”

“I aborted my trip to locate Mr Drah’s house, turned back and reported to Captain Tsikata’s Office the next day. The rest is history,” Prof Kwamena Ahwoi’s book read.

Renowned Kenyan pan-Africanist, Professor of Law and anti-corruption crusader, Patrick Loch Otieno (PLO) Lumumba has admonished the youth to remain resolute in their contribution towards development and unification of the African continent. This he urged them to do without fear of vilification of critics for speaking the truth. Professor Lumumba who was addressing members of […]

The Chief Executive Officer for COCOBOD Mr. Joseph Boahen Aidoo has come under a tough castigation over the gradual decline of Ghana’s cocoa industry. Ashanti regional Chairman for Ghana Union Movement (GUM) has descended on the government official, pressing charges that his (COCOBOD CEO) fat monthly salary which according to him revolves around GHs 80,000 […]

Three (3) Constituency executives of the New Patriotic Party (NPP), have filed a suit praying the High Court to stop the Electoral Commission (EC) from allowing the NPP’s Parliamentary Candidate for the Amasaman Constituency from picking and filing his nomination forms for the 2020 Presidential and Parliamentary elections. The three Plaintiffs, Isaac Owusu Ansah, NPP […]