NPP’s Chairman Wontumi has officially responded to his critics who have been chastising him for his ‘funny’ English speaking skills. 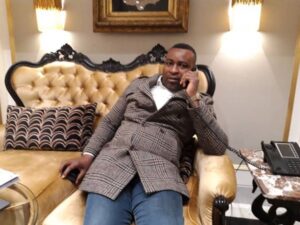 Chairman Wontumi in a response established that he is a rich fellow and that he’s also handsome and that the jewellery he adorns himself with alone costs over $320,000.

He told individuals who have punching holes and lambasting him over his poor English to jump into the sea if they care.

Chairman Wontumi has over the past couple of days been trending.

Hon Alidu Seidu NPP parliamentary candidate for Asawase constituency has embarked on a distribution spree of alcohol based sanitisers to all persons within the constituency under an initiative dubbed; “one-man-one hand sanitizer”. 50,000 sanitisers branded with NPP colours, image of Hon Alidu Seidu and a highlight of his parliamentary quest is currently on distribution to […]

Press Release. 23rd May, 2022. *Best wishes to All candidates* *Elect people who are Party First believers.* This weekend, the New Patriotic Party will hold Regional Delegates Congresses in all the sixteen Regions of Ghana to elect Regional officers of our great party . These elections are hugely important. They are because, we are going […]

Founder, leader and National Chairman for the United Progressive Party (UPP) Akwasi Addai Odike has challenged flag bearers of the two main parties in Ghana NPP and NDC to a political duel; stating that he is prepared  to engage them  in a national debate on any platform. In an exclusive interview with www.leakynews.net, the outspoken […]