From a very small and a humble beginning, Duncan-Williams has shot up to become a remarkable man of God who represents Ghana and Africa on an international level.

The renowned Archbishop in 2017, was named by the New African Magazine as one of “The 100 Most Influential Africans”.

He is esteemed as one of the richest pastors in Ghana and he is the first non-American to lead the prayer for the incoming President and Vice President of the United States during the inauguration. 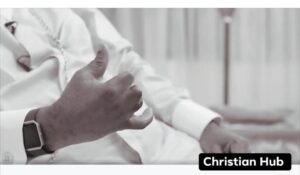 All these and more achievements didn’t come by chance.

His life is a study of providence and destiny but it is also an application of persistence and the will to overcome all odds both physical and spiritual.

The renowned Presiding Archbishop and General Overseer for Action Chapel International ministry Nicholas Duncan-Williams upon his many tribulations while growing up have revealed how his fingers got burnt and ‘chopped’ off.

In an exclusive interview with Bola Ray on Starr Chat, and as monitored by Ghpage.com, the Archbishop Duncan-Williams said that While growing up, on multiple occasions, he nearly lost his life.

He battled with spirits and was visiting shrines.He emphasized that, the thirst for success made him visit shrines for it.

Archbishop Duncan, known in many parts of the world as the Apostle of Strategic Prayer, the 60-year-old added that;

“At age 20 something significant happened.I had nightmares, hallucination and heard voices at home; spiritual voices contending with the voice of truth, grace. I was captured by the spirit, instructed by it to light a candle and dip my hands into the burning flame.”

“I obeyed without question but with pain. My lips at a point were sealed until the pain had become unbearable. My fingers darkened in the flames until they turned into ashes. My shouts attracted siblings who came and rushed me to Korle Bu Hospital where I was admitted for months.”

That was his break. He had a spiritual encounter with God on his bed at the Korle Bu teaching hospital and everything changed. When grace finds you, it doesn’t matter who or where you are.

Archbishop was born into a broken home, raised by a single mother. His twin brother failed to make it during birth. He lacked many things at birth including the love and protection of a father.

Food to eat was a struggle. Education was a luxury. He had little or none for all that. He pushed trucks, sold chewing gums on the streets to put food on the table.
He tried to go to America through Stowaway. He went to Abidjan jumped onto a ship headed for Marseille, France. He was caught and was to be fed to the sharks in the seas of Morocco but grace found him.

A man on board had a son called Nicholas and pleaded for him. They hid him in the dungeons of the ship until they got to Marseille. He disembarked safely worked at the port for a while but got caught and repatriated to Ghana because he had no papers.

Few weeks in Ghana, Nicholas run out of money and had to do another stowaway, this time to Israel, the land of promise. He went to Abidjan went on his knees with a fervent prayer to God asking God for a way in Israel. That, too, failed and he has repatriated again.

He is richer today but poverty was his great friend in the past; a preacher man today but he paid visits to shrines and encountered spirits in the past.

Fire-brand Evangelist Bishop Charles Agyin Asare last night 26th May 2020 flared the passion of Christians as he charged them to display God’s power at a higher and a unique dimension. Speaking on PTV as he led a prayer and fasting program, the international Cleric who is the founder and leader for Perez Chapel International […]

Dear Pastor, See Why Your Church Is Not Growing

NINE(9) POINTS TO HOW A CHURCH CAN CONTINUE GROWING 1. APPEARANCE: The church building must look attractive. The church leaders must dress nicely. How the church is decorated is very important, and keeps members in the church. 2. *FIRST IMPRESSION AT THE CHURCH IS KEY*: How to welcome a visitor can keep him/her in the […]

Note: Picture used for this piece is for the purpose of illustration In the year 2010, I fell very sick of a strange disease. Everybody who knew me fell sorry for me because my condition worsened to the extent of making people feel the disease was out of the ordinary. People far and near attributed […]