The Chief Executive Officer for COCOBOD Mr. Joseph Boahen Aidoo has come under a tough castigation over the gradual decline of Ghana’s cocoa industry.

Ashanti regional Chairman for Ghana Union Movement (GUM) has descended on the government official, pressing charges that his (COCOBOD CEO) fat monthly salary which according to him revolves around GHs 80,000 plus his luxurious land cruiser vehicle are the reason for the dwindling standard of cocoa production in Ghana. 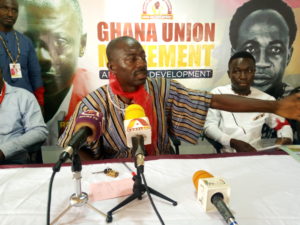 Mr. Hirisuni Hamza spelt out without fear or favor that Mr. Aidoo’s ‘titanic’ remuneration among other juicy benefits are all tapped from cocoa proceeds.

At a press briefing held in Kumasi on Monday, the chairman for the opposition political party recalled that he(Chairman) one time told the COCOBOD CEO right in the face during a meeting that “…the reason why cocoa producers of today are not making much out of the business unlike our ancestors is because of you (CEO). Your fleet of land cruiser vehicles was bought with cocoa money…In the olden days it wasn’t like that.”

“…as the CEO for COCOBOD how much do you take a month as your monthly salary? Over eight hundred and something  million (old Ghana cedis). So if you are entitled to all these monies derived from cocoa proceeds, how much will be left for the ordinary cocoa farmer to rely on?”, he gave a flashback on a question he put to Mr. Joseph Boahen Aidoo.

According to him, the foregoing was a reply he gave to the government official after the latter drew a sharp contrast between cocoa farmers of today and those who lived years ago.

He said Mr. Aidoo told them at the meeting that cocoa farmers of old were able to make properties through cocoa farming but farmers of today are unable to advance like those of old who were in the same business.

Mr. Hamza further exposed that there is top official at COCOBOD who doesn’t even know how a cocoa pod looks like.

“Somebody works at COCOBOD. A top official. He doesn’t know how a cocoa pod looks like. Will this help our country”.

He continued to state that there is no way Ghana will go forward with how the  leaders are handling the country. He therefore advised Ghanaians to give Ghana Union Movement the chance to government the country.

*01/06/2020* *TO ALL MEDIA HOUSES* *RE: BEKWAI CONSTITUENCY PRIMARIES: DESPERATE JOE OSEI-OWUSU CRIES TO THE PRESIDENT TO SAVE HIS SEAT* Our attention has been drawn to a supposed Press Release to all Media Houses issued on the 29th May, 2020 signed by Katakyie Opoku Agyemang, Michael Effah, Seth Amoako, Francis Fordjour and Nana Kwame who […]

Just In: Asanteman Nails Akuffo-Addo. “You Dump Us After Every Election”- Says Group

Executives of a kumasi-based pressure group called “Asanteman Nkosuo, NPP Mpuntuo” have fired another missile against the rank and file of the New Patriotic Party (NPP). They have cautioned the leadership of the party to halt the attitude of always shunning the grassroot anytime the latter calls on them for assistance after elections. According to […]

Musah Superior writes: I am filled with great joy to wish all Ghanaians living in Ghana and abroad a very Happy Independence Day! The significance of today is huge as it marks the beginning of the 65th year of our freedom from the tyranny of colonial rule. Today is a celebration of freedom for us. […]