The much expected coronation of the Deputy Registrar in charge of Faculty of Engineering for Takoradi Technical University Mr. Kenneth Boateng as  “Kyidomhene” of  Dadease Traditional area  of Bekwai Municipality in Ashanti region has been scheduled take off on Thursday 20th August, 2020.

His elevation by the traditional leadership to such a prestigious and enviable position was triggered by his undiluted love and passion, geared towards the development of the community.

Premised on his stellar delivery in the field of academic hence his current official position, majority are optimistic that he serving within such a traditional capacity will be a plus to the efforts of Chief and people of the area.

The venue for the coronation as planned by organizers  will take place at Dadease Chief’s palace. 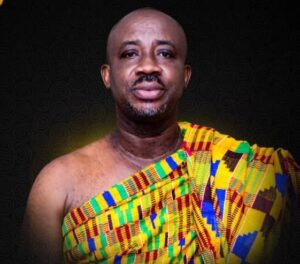 Nana Oti Boateng II, known in private life as Mr. Kenneth Boateng, hails from Dadease in Bekwai  Municipality of Ashanti Region. He is from the Royal Asona family of Dadease who are occupants of the Kyidom Division Stool.

He was born on 18th July, 1970 at Bakwai and named Kweku Boateng, the last son and the youngest of among five children. His mother’s name is Madam Comfort Donkor and father Mr. P.K Antwi.

Nana Oti Boateng II, was brought up by his grandmothers (Nana Akua Agyeiwaah and Nana Akosua Nsiah). In his early years, his grandmothers taught him traditional values and culture which helped him to develop interest in Asante culture and related issues.

Nana Oti Boateng II is married to Nana Adwoa Pinamang and has been blessed with four children.

He started his elementary education at Dadease Roman Catholic Primary School and from there enrolled at Ejisuman Secondary School where he obtained his ‘O’ Level certificate. After ‘O’ Level, he carried on with his education at Kumasi High School for his ‘A’ Level and pursued his tertiary education at the University of Science and Technology now (KNUST) for his Bachelor degree in BA Economics and Sociology. He later went to University of Education, Winneba to attain Master of Education in Educational Administration and Management.

Nana Oti Boateng II, has also attended a number of workshops and seminars in the areas of Administration, Management, Education, Entrepreneurship and ICT.

During 1992/93 National Service year, he served as a primary health care facilitator in Amansie East District. Again in 1997/98 Service year, he taught Economics at Oppong-Memorial  Secondary School at Kokofu in Ashanti Region. After his National Service, he gained employment at Ghana Education Service and  was posted to Dompoase Secondary School  where he taught Economics and Geography for one academic year.

In the year 2007, Nana Oti Boateng II (Mr. Kenneth Boateng) was promoted to the rank of Assistant Registrar and also as Head of Examinations Unit of the then Polytechnic.

In January 2013, he was promoted to the rank of Senior Assistant Registrar and also made Head of Academic Affairs Division of the Institution.

In October 2016, through hard work, perseverance and dedication, he was promoted to the rank of Deputy Registrar and continued as Head of Academic Affairs Division. In January 2020, he was transferred to the Faculty of Engineering as Deputy Registrar in charge of the Faculty, the position he is still holding.

My vision is for the Kyidom Division to support the Dadease Traditional Area to play a stronger role in ensuring peace, stability and unity among the people of the Traditional area, and the realization of their aspirations for economic, social and cultural advancement.

The above vision, would be driven by the following:

In conclusion, Nana Oti Boateng II is very affable, kind hearted, level-headed and has a great sense of humor.

His long years of service in public administration has endowed him with an exceeding administrative acumen. Nana Boateng readily avails himself to execute any task that confronts him and deals with challenging issues in a very passionate manner.

Clearly, his selection and subsequent coronation as Kyidomhene of Dadease comes as no surprise. He would undoubtedly be a toast of his people.

Okyenhene Osagyefuo Amoatia Ofori Panin II says he would be shocked to the bone if Ghanaians go to the poll and vote against President Nana Addo Dankwa Akufo-Addo. He said any eligible voter who has benefited from the numerous social intervention programmes and other infrastructure development under the Akufo-Addo government must honour the president with […]

Newly sworn-in Chief for Pampaso Nana Gyamfi Kumanin III has pledged that he will not disappoint His Royal Majesty Otumfuo Osei Tutu II vis-à-vis the execution of his mandate as the traditional leader for the area. He mentioned at the time he was swearing the great oath before the Asantehene at manhyia palace on Thursday […]

The woes of embattled Member of Parliament, Carlos Ahenkorah continues to heighten as he has now been barred from stepping foot in the palace of the Tema Traditional Council. The Council has warned the Tema West Member of Parliament not to visit the palace, observing that he has never accorded the institution the respect it […]