Kumasi Metropolitan Assembly (KMA) has officially launched an ANTI-STIGMA CAMPAIGN on Coronavirus; a newly coined initiative aimed at debilitating the heat of humiliation suffered by victims, specifically survivors of covid-19. 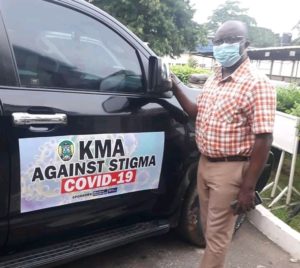 The out-dooring of the program was held on Wednesday 3rd June 2020 at the popular Rattray Park under the able support of project partners; Bloomberg Philanthropics and Vital Strategies through the “Partnership for Health cities COVID-19 Response initiative”.

Considering how quick the canker in question is gaining a center stage, Mayor for the Metropolis Hon Osei Assibey indicated in his speech at the event that urgent steps need to be implemented to address the challenge before it gets out of hand.

Per arrangements vis-à-vis the execution of the program, the Covid-19 Response Team of the Kumasi Metropolitan Assembly led by the Mayor Hon Osei Assibey has taken up the initiative to embark on a media and community based anti-stigma campaign within the metropolis.

As announced by the Mayor, a well-crafted public education-based Anti-stigma campaign message targeted  at systematically dealing with the issue has been designed.

It will deal with the under-listed fallout of the Covid-19 fight, among others ;

“The fight requires the support of all and sundry. We count on you all to enable this campaign succeed. I therefore call on individuals, corporate bodies and institutions, especially the media houses to lend us their support in whatever form to enable us achieve the desired targets. We are indeed poised for action and want to complement government’s  efforts at containing the spread of the virus”, Hon Osei Assibey made this statement during the event.

In his address, he expressed worry over how survivors of the virus have come face to face with the unfortunate challenge of being stigmatized by members of their communities “…to the extent that they and their families are treated like outcasts”.

High Blood Pressure? Stop Eating These Foods For Your Own Sàfety

Forget About Orthodox Medicine, Use Common Honey To Treat These Diseases

Hello my dear reader, I know you enjoy taking in honey so much even including myself. It is a common fact that everybody on this planet loves consuming honey due to the great taste is posses but are you aware that honey comes with a multitude of health benefits, as well? Honey is not only […]

Moringa oleifera is a medicinal plant that has been hailed for its health benefits for thousands of years. It is very nutritious and beneficial for people who lack essential nutrients. Moringa leaf is very rich in healthy antioxidants, bioactive plant compounds, minerals and vitamins (VitB6, VitC, Riboflavin, VitA). It also carries other nutrients such as […]