A bloody conflict erupted last Wednesday around 9:45 am between traditional subordinates of the Chief of Kwanwoma community Nana Amponsah Kwah IV and Chief for Yabi Nana Kwame Frimpong over a parcel of land. 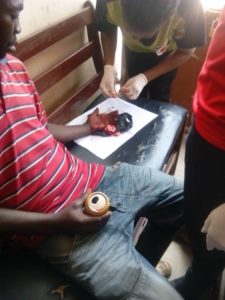 The gory incident occasioned the wreaking of cutlass injuries on one Kwaku Addai otherwise known as  “D.D” allegedly by one Akwasi Tawiah who according to our intelligence is a  brother to the ‘Akyeamehene’ for the Chief of Yabi.

Per the details of the matter, close to ten men including the Kyidomhene Nana Kofi Amponsah were assigned by the Chief of Kwanwoma on the same day to halt the building of a structure which was then in progress.

This according to the account of Kyidomhene came about after he (Nana Amponsah Kwah IV) received a hint that some unknown persons were on a parcel of land (within his area of jurisdiction) putting up a project without his notice. 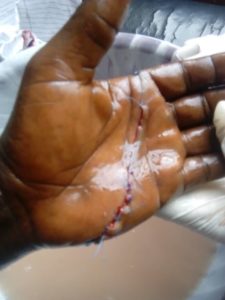 “Arriving at the site, we spotted the chief of Yabi in a distance, approached him, showed courtesy by way of greetings and informed him the reason for our presence. After disclosing to him that the Chief of Kwanwoma assigned us to the area to halt developers who were then busily working, Chief of Yabi harshly told us that he was the one who permitted them to work on the land”, he narrated.

Kyidomhene alleged that, the Chief for Yabi abruptly became enraged, insofar questioning them “who is the Chief of Kwanwoma  to stop me from working on the land”.

After proving futile in their attempt to calm him down by way of explanation, the Chief as alleged persistent in his verbal challenge on the supremacy of the Kwanwoma Chief which sparked a reciprocal response from the brother to Kwanwoma Chief called Kwaku Addai, leading to a heat of argument.

According to an audio and a video intercepted by www.leakynews.net , Chief for Yabi was overheard ordering Akwasi Tawiah to butcher Kwaku Addai, a brother to Nana Amponsah Kwah IV with a cutlass.

The latter had his palm and other areas of his hand deeply slashed through after blocking his attacker’s cutlass from striking his head.

Yabi Chief in the audio was heard exchanging  words with the Kyidomhene, ordering Tawiah to slash somebody with a cutlass. When told by the Kyidomhene on repercussions of giving such a callous order he said “the matter will not go anywhere”. 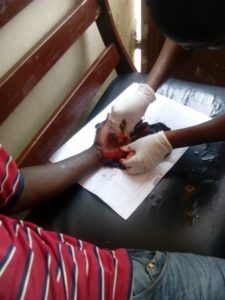 In the audio, Chief for Yabi claimed ownership of the land and that Nana Amponsah Kwah IV has no right whatsoever to stop his men from working on that tract of land.

The matter has been reported to the Police for further investigation.

The woes of embattled Member of Parliament, Carlos Ahenkorah continues to heighten as he has now been barred from stepping foot in the palace of the Tema Traditional Council. The Council has warned the Tema West Member of Parliament not to visit the palace, observing that he has never accorded the institution the respect it […]

Okyenhene Osagyefuo Amoatia Ofori Panin II says he would be shocked to the bone if Ghanaians go to the poll and vote against President Nana Addo Dankwa Akufo-Addo. He said any eligible voter who has benefited from the numerous social intervention programmes and other infrastructure development under the Akufo-Addo government must honour the president with […]