Bishop Charles Agyin Asare was in his elements last night when he was spotted by leakynews.net on PTV uttering red-hot prayers against demonic plans aimed at plunging the nation into conflict in this year’s general elections. 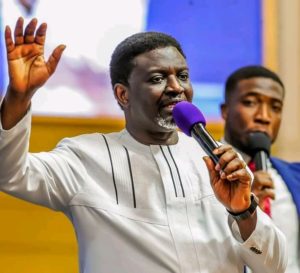 The fire-blazing Evangelist in a televised prayer and fasting program led some prayer warriors of his church to extinguished dark agenda that seeks to magnify the inactions of individuals to generate confusion.

Bishop Agyin Asare in his prayer topic gave the 1993 Kokomba-Nanumba conflict as a precedent.

He made reference on how the conflict broke out all because somebody killed another person’s foul.

Leader for Perez Chapel International said the incident was so much ballooned by the devil and as a result generated misunderstanding and conflict in the area.

Speaking from a spiritual perspective, he explained that the devil magnified the event behind the scene.

“…behind the scene the devil had orchestrated and so when the foul was killed, suddenly there was a misunderstanding”.

In his prayer, he said that no word or deed of a Pastor, a politician, a journalist should push the nation into political upheaval.

With a strong spiritual backing of his prayer warriors, he took charge of the airwaves and sanctified it with the immaculate blood of JESUS after he recalled to memory how Rwanda was plunged into war through the media.

DON’T IGNORE: see meaning of flying in a dream and other common ones

Flying in a dream and common ones you should not ignore We all dream in the nights. Are you aware of the fact that God talk to us through our dreams? You just imagine if the dream you had last night contain that answer you have been looking for, but you couldn’t realise it is. […]

“kumerican”; Ghana is heading towards danger. I see blood all over

Prophet Kofi Nkwantabisa-founder and leader of Nkwantabisa Prayer Grounds at Keyaasi Bosore has called on Pastors and opinion leaders in Ghana to voice out against the newly introduced slogan “Kumerican” in Ashanti region. He hinted of a vision he received from God months ago, explaining that the slogan if not kicked against will trigger a […]

See why most Pastors die young in Africa

Some few days back, a Pastor was preaching in his church and people were really enjoying the sermon. Then suddenly he froze and had to be rushed to the hospital and had not opened his eyes as the time of writing this! Another Pastor went to a mountain, proposing to fast for 100 days. He […]