The invisible killer Coronavirus is fast spreading “all over Malawi” and “faster than before”, the country’s new President Lazarus Chakwera said in what was billed as a special address to the nation. 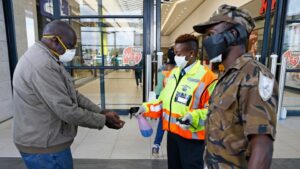 In a brief message, he underlined that things can be summed up in five words: “Malawi, we have a situation”.

The President made an indication that even though the country has only around 1,400 people who have tested positive, almost half of the cases came in the last three weeks.

He continued in his statement that the virus is now spreading within the community rather than coming from outside.

He added that some restrictions will be declared next week, but acknowledged that a balance had to be struck with maintaining livelihoods.

personally I don’t agree with Akuffo Addo on many things…-Dr. Amoako-Baah

Science Lecturer, Dr Richard Amoako-Baah, is doubtful of former President John Dramani Mahama’s ability to adeptly handle the affairs of this country. Even though he has been President before, Dr Amoako-Baah opines the economy was in bad shape with continuous power outages (dumsor) under his (Mahama) tenure. Speaking in an interaction on Neat FM, he […]

Mali to have 18 months transition to Civilian rule

New military leaders for Mali have all settled on establishing an 18-month transition government until an election can take place, following last month’s coup. Spokesperson Moussa Camara announced that the interim government would either be led by a military officer or a civilian. The pledge came after three days of dialogue with opposition and civil […]

State government will be setting in motion a legislation to freeze the transfer and posting of teachers for 10 years, Assam Education Minister Himanta Biswa Sarma has stated. He again disclosed that anyone who recommend and approve any of such transfer will be punished with three years imprisonment. The Education Minister in a state assembly […]