Popular Preacher and Founder of the Anointed Palace Chapel (APC), Reverend Kwaku Antwi, popularly known as Obofuor has expressed that he desire to formally sit down with MP for Assin Central, Ken Agyapong in order to have a chat. 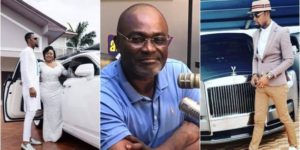 The lawmaker has been on a massive campaign to expose fake ‘men of God’ who hide behind the legality of religion to rob vulnerable people of their livelihoods.

In the course of the MP’s series of investigations, Reverend Obofuor’s name has come up in recent times, though unlike his colleague Obinim, he has chosen not to stoke the lawmaker’s anger by spiting him.

Though a video emerged last week in which Obofuor was seen and heard issuing warnings to a supposed big man who owned media houses, it later emerged that the video was an old one and was not even directed at the MP, though initially many people had sought to lay it at the parliamentarian’s feet.

Now, it appears the stylish Pastor is taking concrete steps to call for a truce as he has in a video, expressed his willingness to meet with the MP to officially offer his greetings, whatever that means.

A Kumasi-based clergy Bishop Dr.Adamu Hamidu- has strongly castigated Ghanaian media practitioners who are always bent on criticizing the delivery of men of God. He has indicated that Ghanaian journalists are so quick to tongue-lash and condemn prophets and church leaders over their inactions but are very sluggish to speak against the corrupt practices of […]

A very sad news circulating on a number of social media platforms indicates that a Youth Pastor of the church of Pentecost called Joshua Kofi Baffoe, resident minister for PIWC, Obuasi died in the late hours of Saturday 27th February, 2021 after suffering from a short illness. According to reports, Pastor Josh was known to […]

Fallen angels: see what the Bible said about demons and where they are currently

Demons are part of the spirit beings described in the Christian Bible. According to the holy Scriptures, they are angels who sided with another powerful angel in heaven referred to as “the dragon” to fight against the forces of the Almighty God. 1) According to Revelation 12:7-9 from the Bible: “7 Then war broke out […]