A 9-member committee has formed by officials of the National Commission for Civic Education-Asokore Mampong Municipality to steer the construction of mechanized boreholes in various areas within Asabi community. 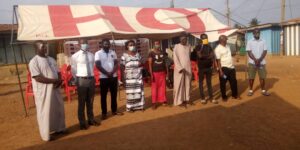 The Committee was inaugurated abruptly after members were appointed at a Social Auditing engagement event which was held on Sunday within the community.

After officials of NCCE had solicited for the views of residents on some pressing needs of the community which demands an immediate attention, the decision to construct mechanized boreholes was considered hence the formation of the committee. 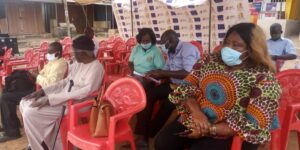 The foregoing  was prioritized over other challenges brought up at the event including lack of a community center, absence of street lights, lack of community school, poor drainage system among others.

The event formed part measures aimed at promoting community ownership of developmental projects and policies, increase awareness of the operations of the local government and empower the citizenry to demand accountability from duty bearers. 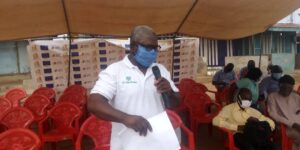 According to the Municipal Director for NCCE Mr. Matthew Agbenu, the engagement is part of activities to be implemented by the commission under Accountability, Rule of law and Anti-Corruption Programme (ARAP). The objective of ARAP is to promote good governance in Ghana by reducing corruption and improving accountability and compliance with the rule of law.

Story By Enock Akonnor enockakonnor2013@gmail.com Kumasi City Mayor Hon Sam Pyne has stated that KMA spends about GHs 30,000 on a single sanitation exercise carried out within the CBD. He said this at the time he was addressing the press after having a fierce confrontation with some commercial drivers and transport operators in Kumasi over […]

“Anytime We Hear Her Name, It Means Goodies Are Coming”- KMA Boss

Mayor for Kumasi Metropolis Hon Osei Assibey has heaped praises on the first lady of Ghana Madam Rebecca Akuffo-Addo following the litany of support she has and is offering his jurisdiction. The wife of the President of Ghana as explained by the Mayor has dispensed many developmental support to the Metropolis including the ultramodern mother […]

Kumasi City Mayor Hon Osei Assibey Antwi has flown out of the country to Abuja, Republic of Nigeria. The move is a response to an official invitation which was extended to him on 9th March 2021 to partake in a consultative meeting of Decentralized Stakeholders (State Governors, Chairperson of District Council, Mayors of City) on […]