The Amansie West District has benefitted immensely from interventions introduced by government to improve the lives of Cocoa farmers in Ghana.

Presently, it has scored a track record as the district that has pruned the largest number of acreages of Cocoa farms in the entire country covering an area of 30,340 Ha.

Farmers in the area have also shown great satisfaction in the Cocoa Disease and Pest Control Programme (CODAPEC) and HITECH programmes.

The foregoing owes to the constitution of community task forces which oversee all spraying activities in the communities.

The above has gone far in reducing absenteeism of spraying gangs. 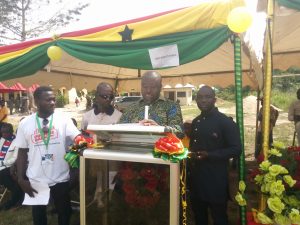 “Under the intervention, Transfarm Akate and Akate Forces have been received and distributed to 80 spraying gangs for spraying activities to cover 28,644 Ha.” DCE for the area Hon. Nii Larteh Ollenu indicated during the occasion of the 38th National Farmers Day Celebration at Nyadeyeya on Friday 2nd December 2022.

He mentioned in his address that government through COCOBOD has assisted Farmers whose cocoa trees were affected by the CSSVD disease to cut down their cocoa trees and afterwards replanted for them.

“Government hired the service of labor to weed and replant the entire farm for the farmers amidst planting of plantain suckers for these farmers”.

In addition, the district will nurse 1,000,000 free cocoa hybrid seedlings for the 2022/2023 cropping season for distribution to all cocoa farmers who want to enter into new cocoa farming.

At the event Mr. Samuel Asamoah of Pakyi No. 1 was awarded as the district best farmer. 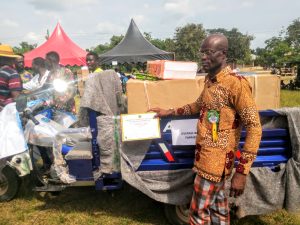 The award was given in recognition of his outstanding contribution towards the development of Agriculture in Ghana.

Over 200 farmers were also awarded at the event.

This Leaf Can Make You A Millionaire Within 1 Year

Are you thinking of engaging in an agric business that can earn you much money? Well this article is for you because crops highlighted in this article will make you a millionaire perhaps within one year. By Jeff Desjardins As with most things, it can be complicated and more nuanced to answer. However, ultimately it […]

At the recently held Africa- EU Week celebration from the 14th to 18th February 2022, young Fairtrade producers were part of a series of side events organised by youth on key thematics relating to integrated development on the African contiment. Fairtrade Africa and Fairtrade International organised a virtual session on ‘Next Generation of Farmers Leading […]

Ghana’s Ambassador to China has given a hint on discussions with Chinese government to allow cocoa producers from Ghana to enjoy zero tariffs on products on China’s market. The foregoing was consequent to the launch of an Africa Cocoa Centre which is intended to serve as a trading hub that connects African cocoa products to […]