Founder, National Chairman and leader for United Progressive Party (UPP) Mr. Akwasi Addai Odike has stated point black that there is no way the sitting President of Ghana His Excellency Nana Addo Danquah Akuffo Addo can positively transform the economic situation of the country if even permitted to stay in power for thousand years. 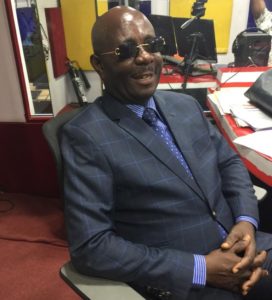 Businessman-turned-politician Mr. Odike tongue-lashed the President as he described him as the kind of political character who lacks vision to do so.

He went further in his statement that the country’s dwindling economy coupled with the high level of poverty is a product of the fact that Ghana lacks visionary leaders.

“…even if we give thousand years to Akuffo Addo to govern the country, he won’t  be able transform Ghana. In the same way if we give thousand years to John Dramani Mahama to preside as President, there is no way he will be able to transform the country. They don’t have the vision needed for the transformation of the country”, www.leakynews.net scooped these words from Mr. Odike as he responded to a question on the airwaves of a Kumasi based radio station Abusua Fm this morning.

The outspoken leader for the opposition party criticized without mincing words that the sitting President and the former John Dramani Mahama per their idiosyncrasies are only playing what he described as politics of equalization.

He poured out these statements after throwing deadly blows at President Akuffo Addo over the litany of setbacks suffered by the Agric sector under his leadership.

Mr. Odike said that the situation of Agriculture during the tenure of former President Acheampong was far better than the present, explaining that the country exported much farm produce to other countries during the regime of the former.

“Today poultry farmers are crying and government is even now considering securing a loan from ADB to support them. Ghana at the moment imports poultry close to the tune of $ 600million every year. The nation imports chicken and imports unemployment. Importation of red meat alone costs the country $ 400 million every year aside oil, tomatoes, onion, maize, rice among others”, he fingered.

“Ghana is running an import driven economy. Things are not well in the country”, he chastised.

Chairman Wontumi of NPP fame has again lashed John Mahama of the NDC over the latter’s failure to concede defeat in the just-ended elections. According to Mr. Wontumi, the Electoral Commission’s Chairperson cannot be blamed for what the NDC assume was a flaw in the declaration of the results. Speaking on Wontumi Radio/TV he noted […]

I am very handsome and rich. My jewellery alone costs $320,000- Chairman Wontumi

NPP’s Chairman Wontumi has officially responded to his critics who have been chastising him for his ‘funny’ English speaking skills. Chairman Wontumi in a response established that he is a rich fellow and that he’s also handsome and that the jewellery he adorns himself with alone costs over $320,000. He told individuals who have punching […]