The Ministry of Food and Agriculture through officials of the Kumasi Metropolitan Assembly has named “Hw3 De3 Awurade Ay3 Kroy3 Kuo”; an association which comprises traders located at Bantama and Suame as the Metro Best Marketing Group (2020). 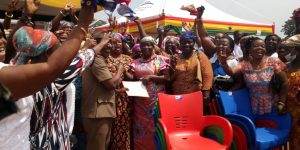 The group was awarded at the just ended 36th National Farmers’ Day celebration (Kumasi’s version) which was held at Duase within the Manhyia South District.

10 chairs, a box of Key Soap and a certificate of honor signed by the sector Minister Hon Dr. Kwadwo Owusu Afriyie Akoto  was given to the group. 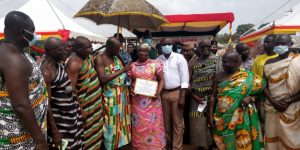 The items were offered in recognition of their outstanding contribution towards the development of Agriculture in Ghana.

Queen for the group Madam Afia Kyeiwaa who received the items thanked officials for the recognition and pledged to continue with the good marketing practices which has until now sustained trade within the metropolis. 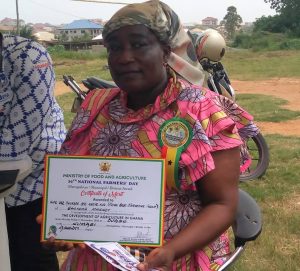 Madam Kyeiwaa compared and contrasted that under the out-gone NDC’s John Mahama led governance, things were tough for market men and women and that traders had to travel to neighboring countries to import even plantain, cassava, tomatoes etc to trade on the Ghanaian market.

“Since Nana Addo came, business has become flexible for us and even traders of our neighboring countries now come to Ghana to export farm produce to their countries. Despite the corona crisis, foodstuff are still in abundance on our various market. If you don’t like things good governance what else would you subscribe.”

Mayor for Kumasi Metropolis Hon Osei Assibey has amplified the much talked about flagship program “Operation Keep Kumasi Clean and Green” by entering into a partnership with officials of the Central Sector Cadet Corps. By virtue of his visionary leadership, the assembly and the later organization on Friday 19th March 2021 kick-started a project aimed […]

Ghana Cocoa Board (COCOBOD) through the Cocoa Health and Extension Division (CHED) has done a presentation of 99,468 bags of Cocoa fertilizers to be distributed to 126 farmer cooperative groups within Wiawso and Akontombra districts of the Western North Region. Mr John Ahi, Boako District Technical Officer, who confirmed the development to the media, said […]

Stop wasting your money on tomatoes and pepper. Do this instead

Instead of spending your previous money on purchasing tomato or pepper on the market which sometimes may not be fresh, take this advise instead. Have you ever considered practicing small farming but don’t have the land or time? Let me school you on how you can plant few vegetables in pots. You can have some […]